One hundred years have come and gone since our forefathers built their first homes and businesses here. Let us pause and look back to some of ‘our’ beginnings. 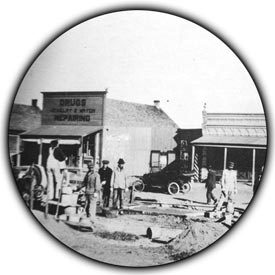 A letter published in the Beloit Gazette in August 1872 states that the town of Tipton, then called Pittsburg, had the town laid out, 4 or 5 residents and a large storehouse of “dry goods and groceries, boots and shoes, hardware, queens ware, hats and clothing, while farmers can buy all the implements they need, from a wagon or reaper to a sewing machine” and was run by the Sternberg Bros.

Also “Through the public spirit of Messers Mackley, Pitt and McCreery and others a neat $1,000 school house will soon go up in Pittsburg.”

William Augustus Pitt, with his family, emigrated to Mitchell County, Kansas, where he homesteaded the quarter section lying just east of Tipton in 1871. This place is the present Herman Hake place. He was appointed postmaster in 1872.

Early in 1872 Peter Jacobs came to inspect the territory and returned to Caledonia, Minnesota, with a favorable report.

The first store was on the farm now occupied by the Edmund Cordels east of Tipton, then called the old Porter homestead, and later known as the Mergen place.

In November 1872, the original town company was organized with Fred Sackhoff as president; W.A. Pitt as treasurer; and J.F. Stunberg as secretary. The Platt was not recorded until May 5, 1877; although named in 1872. 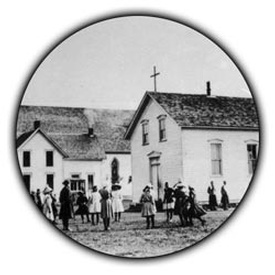 1875 – Mr. and Mrs. Franz Boden and family (she was Elizabeth Schmit) and Mr. and Mrs. Anton Gasper (Margaretha Denis Gasper) and John came over on a boat to New York; train to Wilson and in a lumber wagon to Tipton. They came straight across country; looking for the church steeple they thought had been built. Instead they found only a cluster of buildings, dugouts and the rest in the planning stage. Since they had no place to stay they moved in with the Nick Arnoldys and worked for them for $.25 a day until they had their own dugouts ready to live in.

The same year Rev. Anton Timphaus organized the Catholic People and they chose the name of “Pittsburg Catholic Congregation”.

Peter Jacobs was struck by lightning in 1876 and is thought to be the first death in the new community.

On March 26, 1877, Block 44, in the town of Pittsburg was acquired from the U.S. Government for a Church. On March 27, a receivers receipt covering the land on which Tipton now stands was issued by the United States to Mark J. Kelley, Probate Judge of Mitchell County, granting said land to him as trustee “for the personal use and benefits of the occupants and inhabitants of Pittsburg in Mitchell County, Kansas. On March 28, N. Reinert and M.J. Arnoldy were commissioned to go to Russell for the building materials for a Church – which was completed by mid summer.

The ship – SS Vaderland – arrived at the Collection District of New York on May 17,1877, with another group for Pittsburg. They were: John Schmit, 58, his wife Regina Fie Schmit 56: their children – Barbara Schmit 23, Katherina Schmit Much and her husband John Much; grandchildren John 11, Barbara 4, Franz 3, M. Ann (Emma) 2; Anna Marie Schmit Schmit Streit 26, an infant.

Anna Arens Gasper, 59, (mother of Anton Gasper who came in ’75) also decided to come along as her husband had died and she wanted to be with her family.

President Grover Cleveland issued patent on the quarter section occupied by the townsite on Nov. 17, 1886 and shortly after Postmaster Seright received word that there was another Pittsburg in Kansas and was requested to find another name. The other Pittsburgh in Kansas was named by Col. Ed Brown. It was called ‘New Pittsburgh’. Both retained the names until the 1880’s. It was rumored a purse of $150.00 was given to old Pittsburg in Mitchell County and it changed it’s name to Tipton as suggested by Chris Reinking; that having been the name of the county seat of Cedar County, Iowa, from which he came.

Rev. Adam Schmidtkonz organized the Lutheran Congregation in 1879. The first marriage was between Henry Albrecht and Helena Lessman on Jan. 14, 1880; and the first funeral that of Carl Clinke in 1880. The Lutherans adopted a Constitution and the Church Book and Hymnal of the Iowa Synod were introduced in the same year.

Sept. 16. 1884 – The marriage of Casper Pahls and Catherine Koster were the first recorded in the Catholic Parish books.

Lutherans erected their first church in 1886.

Because of increasing population and the need for a larger building the Catholics built another Church in 1899. Although they had originally planned to build it of brick, it was made of wood after the failure of the brick factory.

By 1912 The Knights of Columbus organized and is still going strong. Around 1914 the old public school building had been moved and remodeled into a home – the one that Frank Boden now lives in – and the new public building of bricks was ready for school to start.

The first newspaper officially printed was the Tipton Times, published in April 1915, a four-column 8 page periodical by C. W. Wells of Osborne County.

On Oct. 18, 1916 the Salina Northern Train arrived in Tipton. It ran between Osborne and Salina.

SOME OF THE HIGHLIGHTS OF THE TWENTYS AND LATER YEARS…

In 1920 the Tabitha Ladies Aid organized with 23 charter members.

A new brick Grade and High School was built by Catholics in 1921 and in 1922 the Daughters of Isabella was organized. That same year the Lutherans built their brick Church. 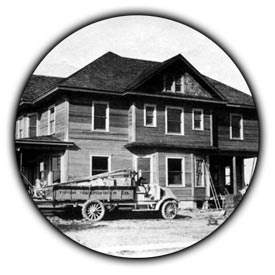 Santa Fe Systems joined our railroad in 1924 and the ‘Grotto of Lourdes’ was erected on the Catholic Church grounds in ’25.

1929 – In January the 4-H Club organized with 54 members. William Seidel was the Community Leader. In May Tipton State Bank started with John Schmitt as President and Chairman of the Board.

1931- American Legion Post received its charter and the Auxiliary organized the same year. The K of C Band was chosen again as State Band.

1951 - Tipton News was consolidated with the Cawker City Ledger.

2005 - K of C Hall was given to the City of Tipton as a Community Center so major remodeling could take place with funding from a KanStep Grant and volunteers to build an addition on the north.
- City of Tipton sells former Tipton Elementary School to Kevin Richey, Markay Specialty Schools.

Since about 1900, we have averaged about 28 businesses functioning at any one time. Some of which have changed hands or succumbed to make way for new enterprises.